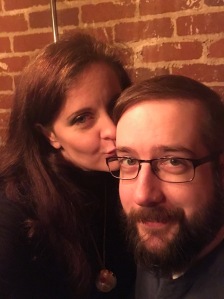 Jeff Pennington is an illustrator, graphic designer, cartoonist and writer born and raised in the deepest hollows of West Virginia. He grew up very poor but is now slightly less poor since he decided to pursue a career as an artist instead of something sensible like a doctor or a plumber. He now lives and works in Bel Air, Maryland and is married to that pretty lady in the photo over there! Her name is Krystal.

He attended Marshall University starting in 2010 and graduated with honors in 2013.
Since then he has been steadily working as a freelance artist while also taking on other jobs to expand his repertoire. Jobs such as: marketing coordinator, print production operator, assistant graphic designer, director of marketing, lead graphic designer and more, with tons of experience in many fields related to art and skills gained through all.

In the spring of 2019 Jeff set out to fulfill a lifelong dream and got the train moving down the tracks by releasing his first EVER webcomic – Inksburg! Looney Tunes meets Noir Detective Fiction! Bob Clampett meets Raymond Chandler! This mystery comic starring funny animals has suspense, gags-a-plenty, and a lovable cast of characters who will for sure one day be very toyetic (call me, Hasbro!). Check it out!

Through everything, all Jeff has truly wanted is to make people happy with his art. Sappy, but true.

All the Jeff links you’ll need:

If you would like to contact me with prospective jobs you can e-mail me or send me a private message on any of my social media platforms. We can work out pricing, a timetable and exactly what it is you want from there!